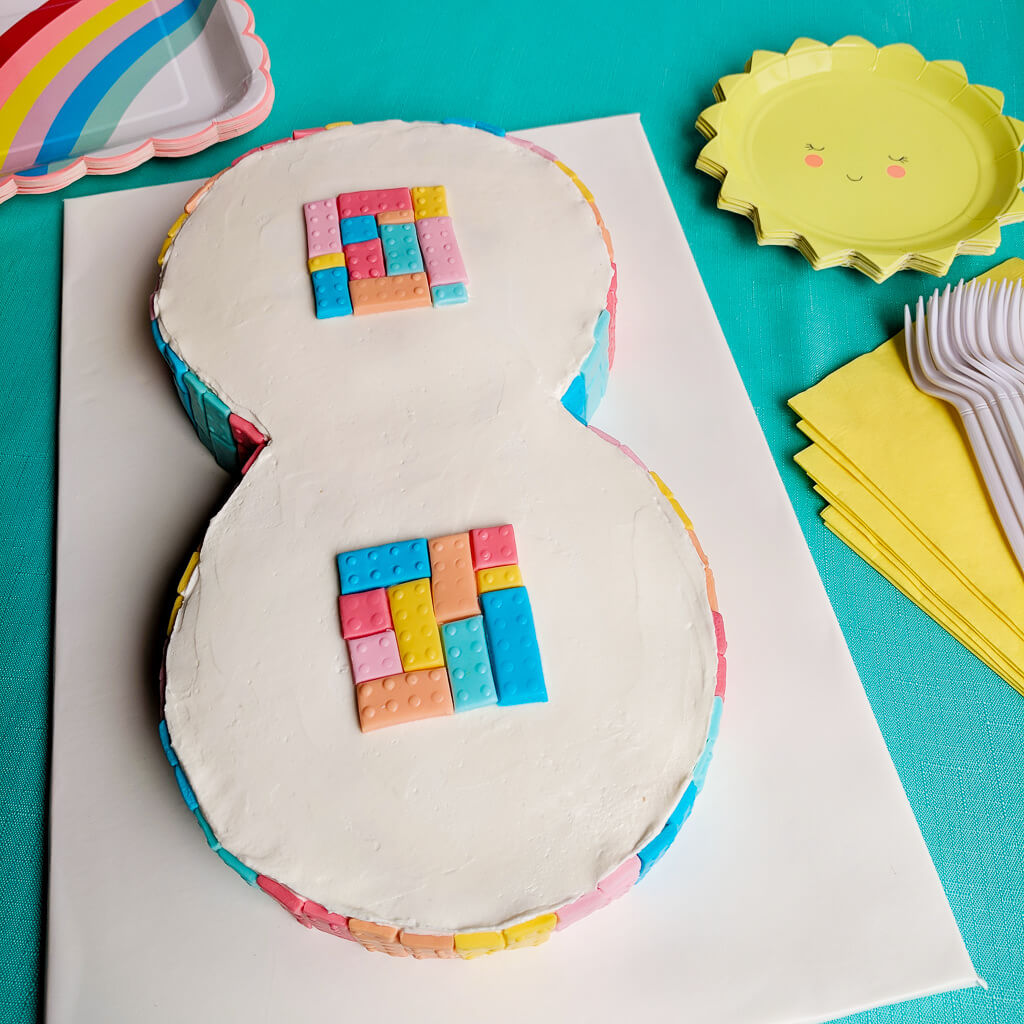 I didn’t want to make the expected stick-some-plastic-LEGO-Friends-characters-on-a-cake version of a LEGO Friends cake, so instead I made a LEGO Friends cake that celebrates the sunshine and rainbows in Heartlake City. The cake is shaped in a number 8 (because my baby Elise turned 8 years old!!) with rainbow-colored fondant LEGO bricks on the sides and top with a clean, white buttercream top. 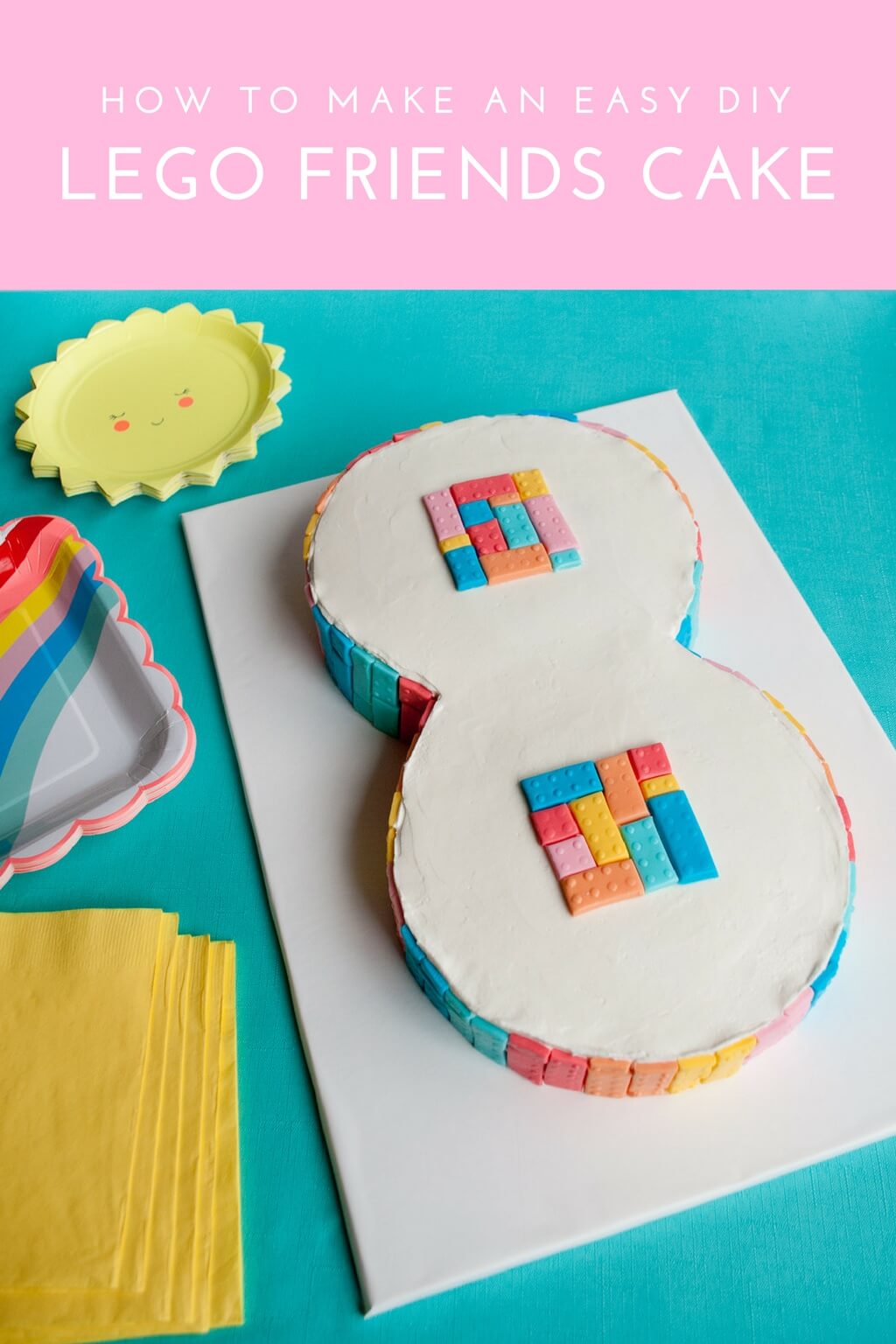 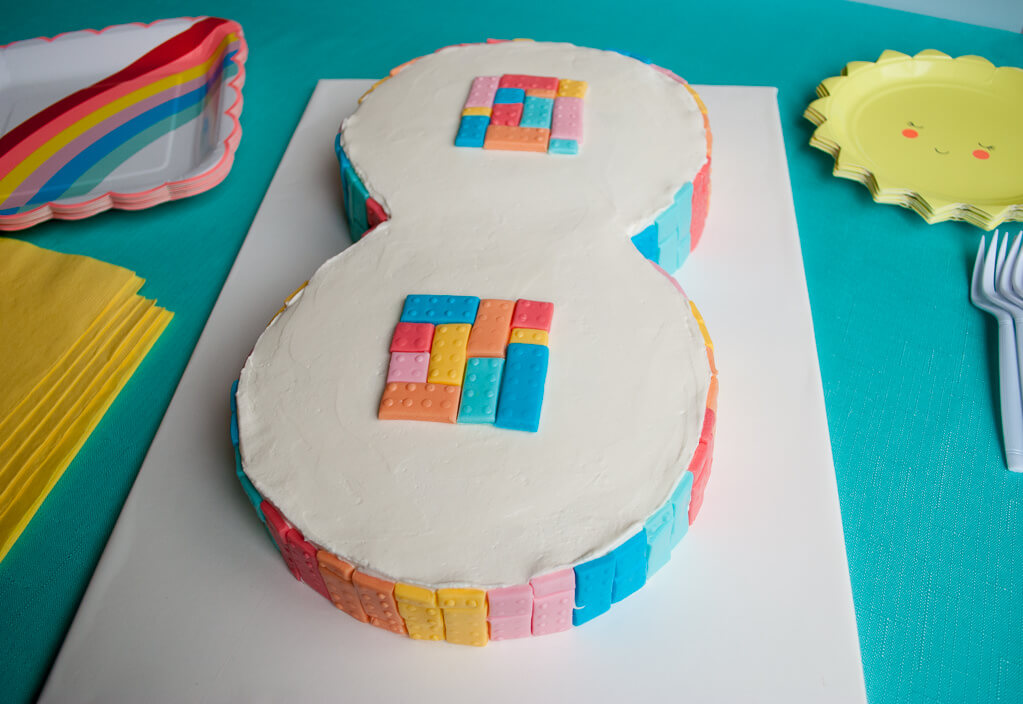 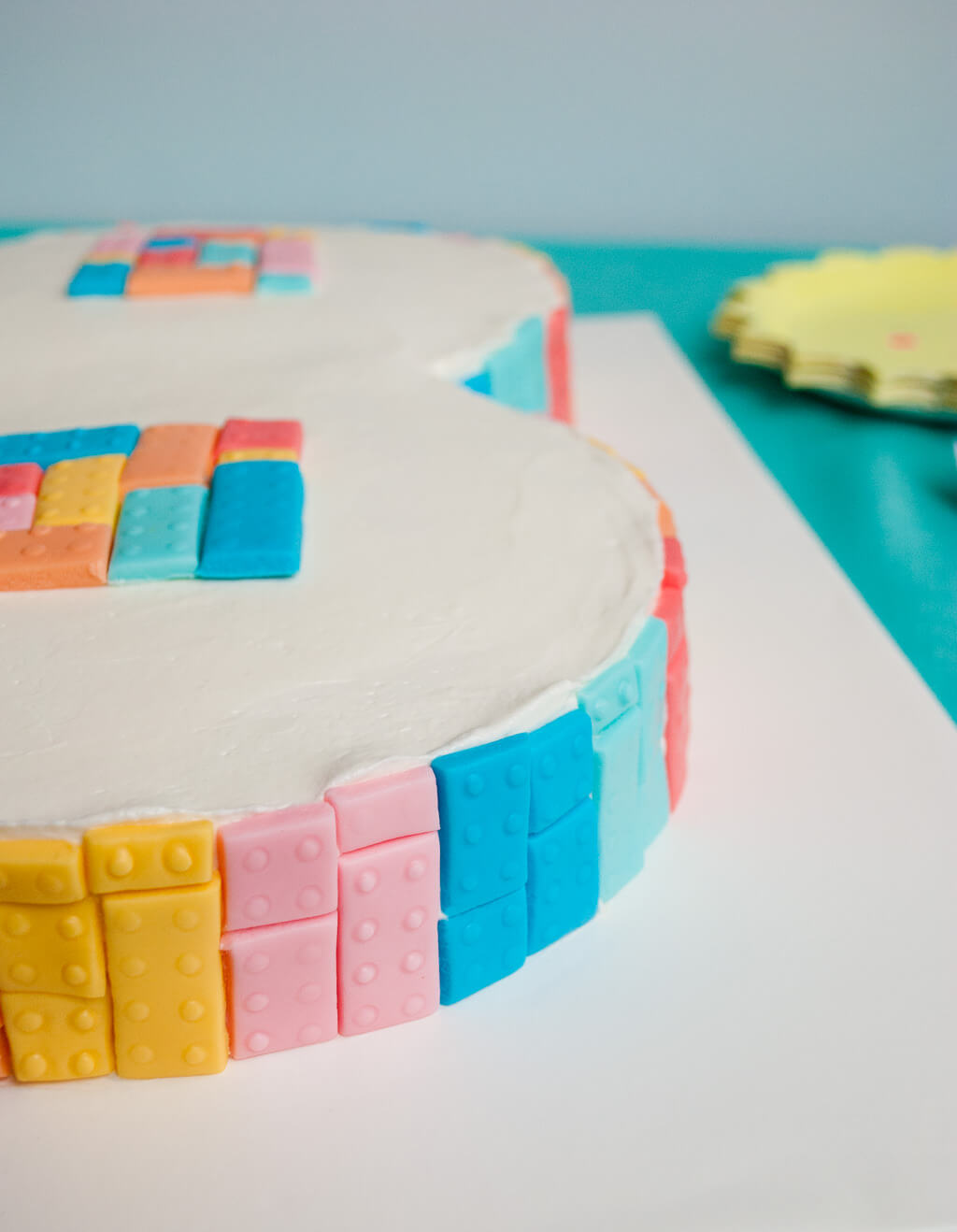 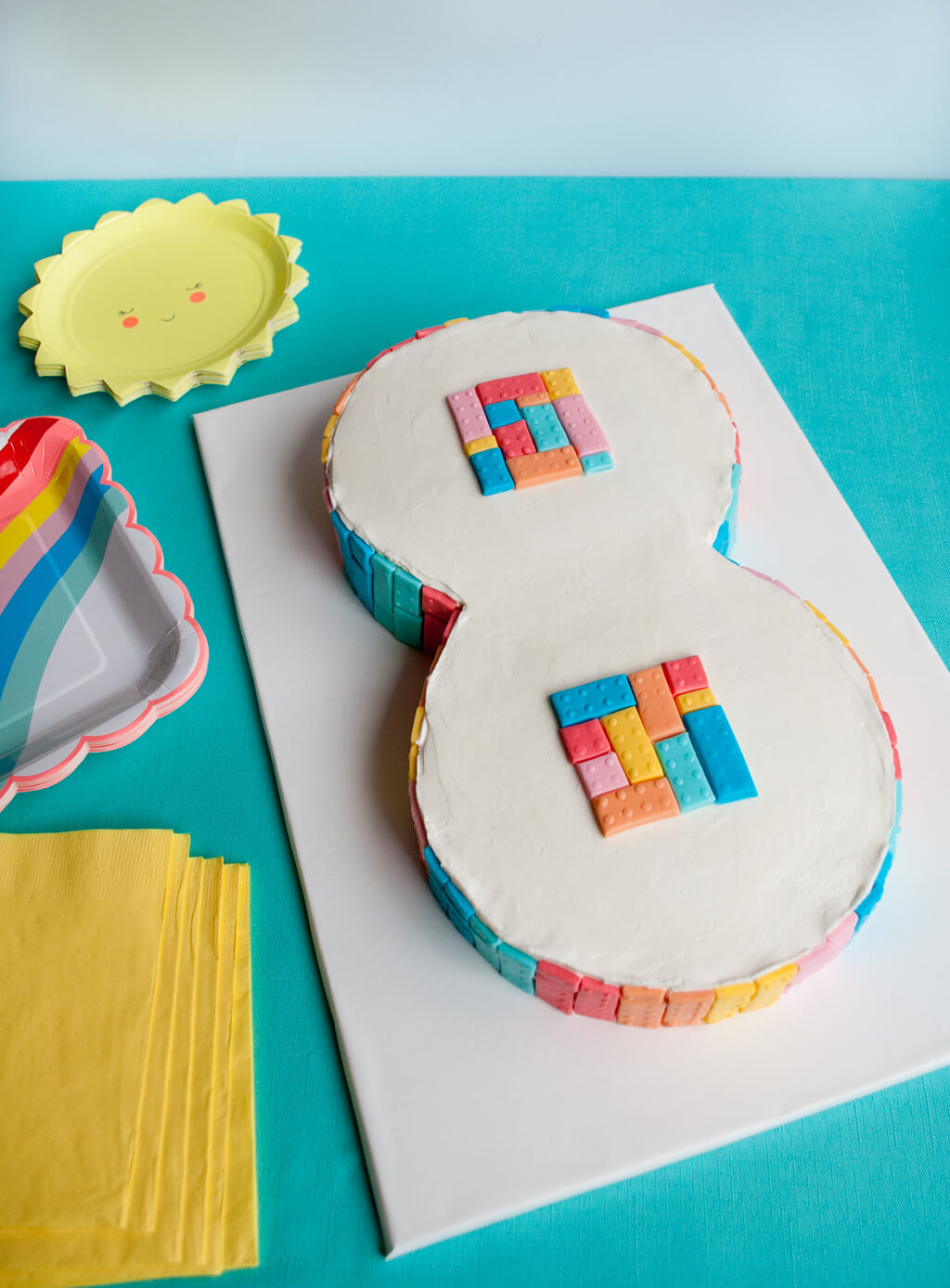 Two LEGO birthday parties in a row, you say? Yep, both of my kids are LEGO fans. I had just made a boys LEGO birthday cake for Liam so I decided to make Elise a totally different type of LEGO cake with thin bricks on the sides rather than life-sized fondant bricks on the top.

And I’ve gotta tell you, making this LEGO Friends cake was super fun and very low stress. I vowed long ago to make my kid’s birthday cakes no matter how they turned out and I honestly think this was the most enjoyable and easiest easy cake that I’ve ever made. 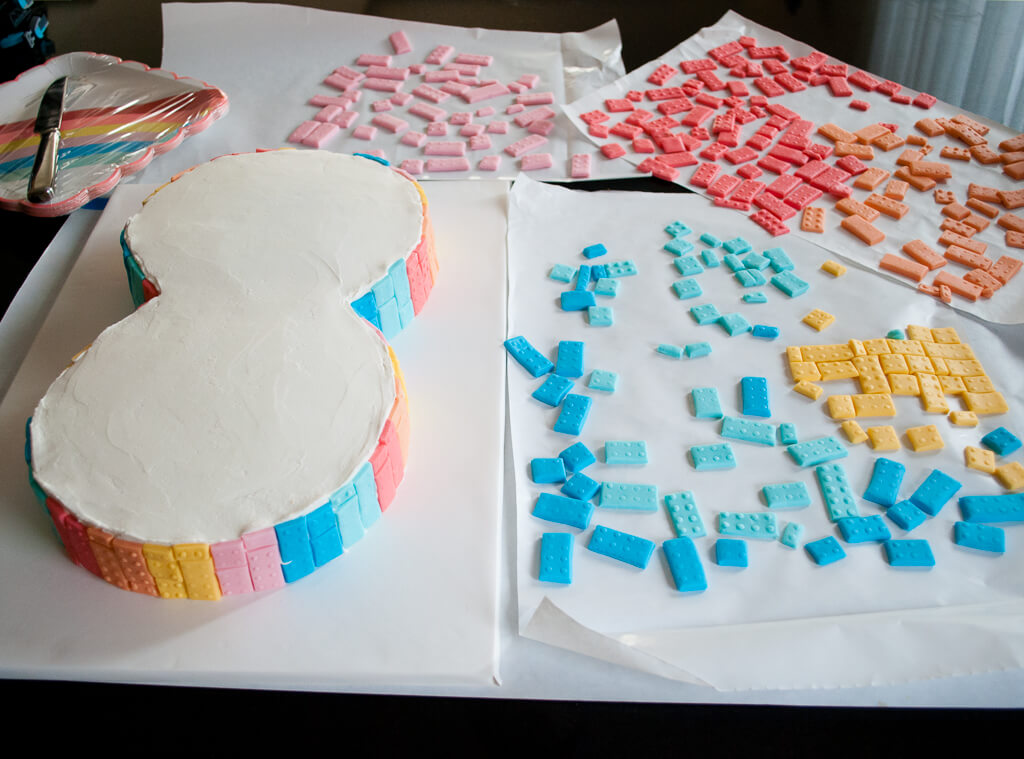 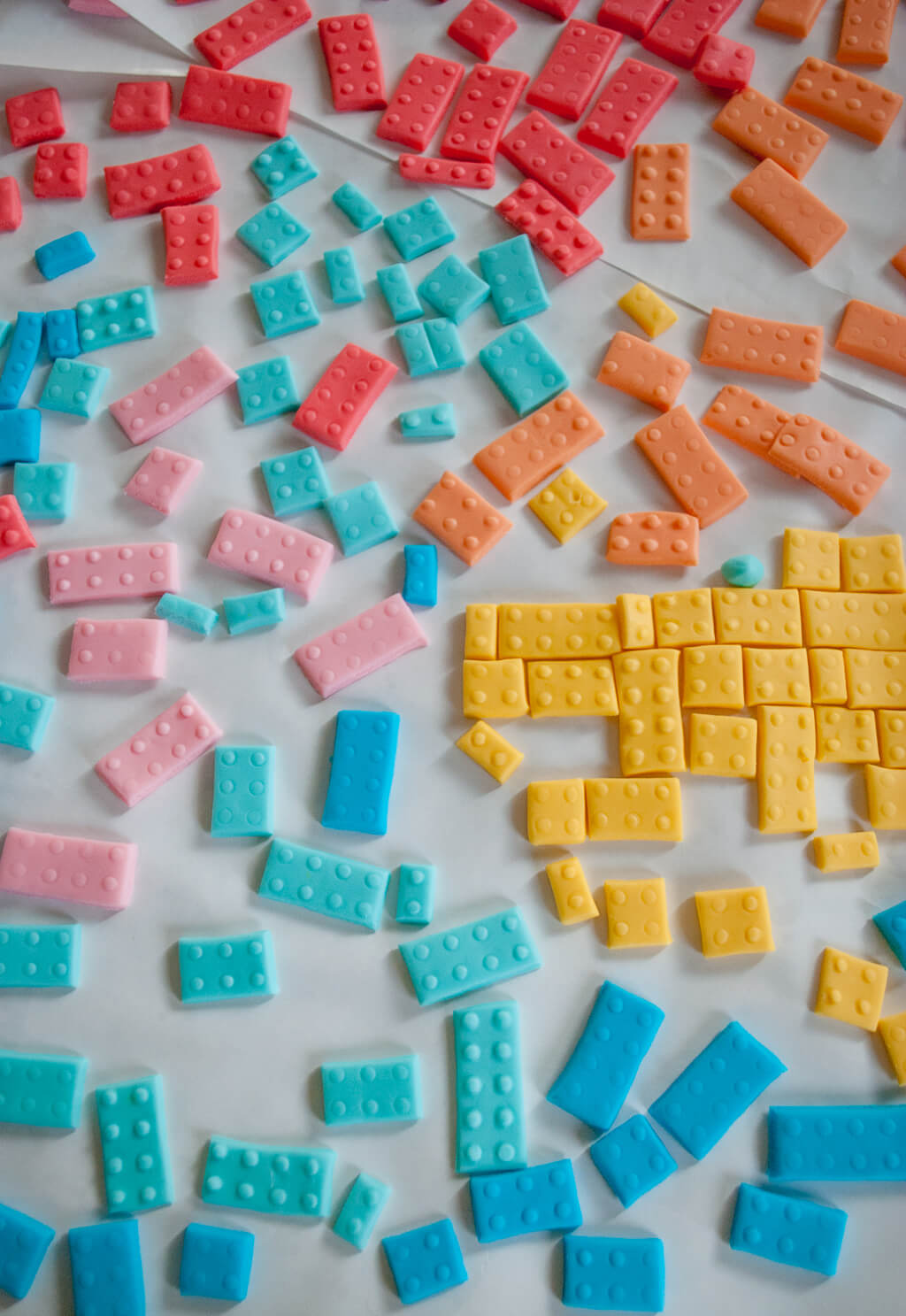 Party guests party also made their own cupcakes in the Heartlake City Bakery that coordinated with my LEGO Friends cake. I made extra fondant LEGOs and rainbow cake toppers for them to top their cupcakes. 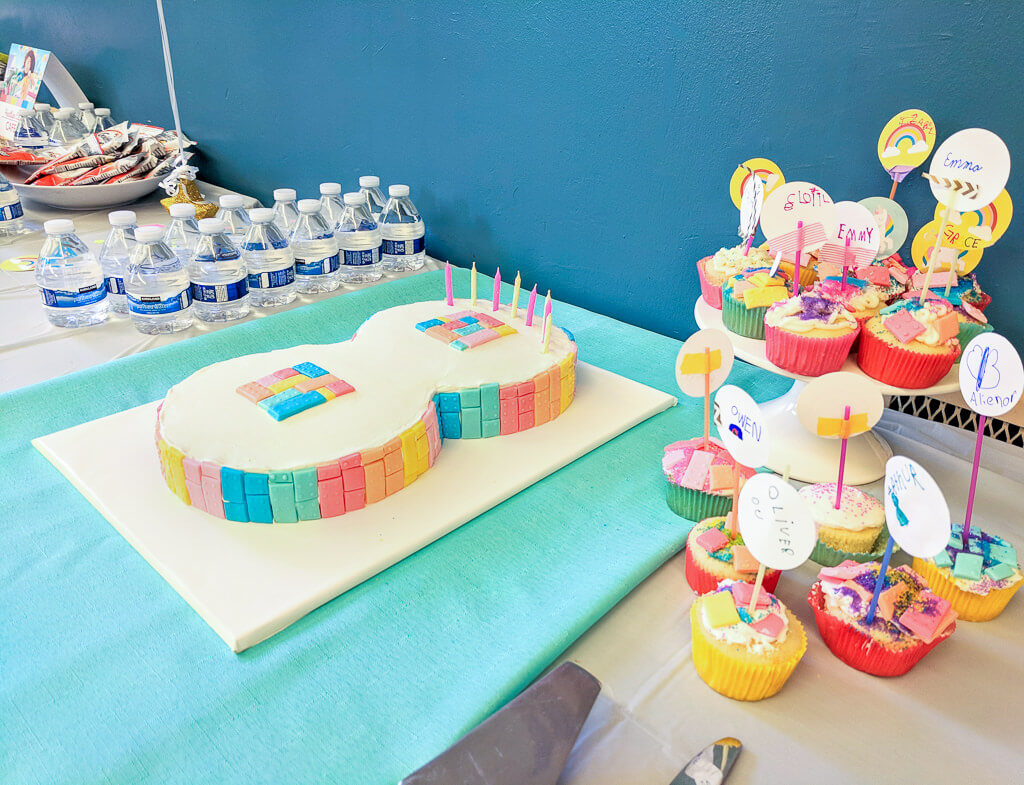 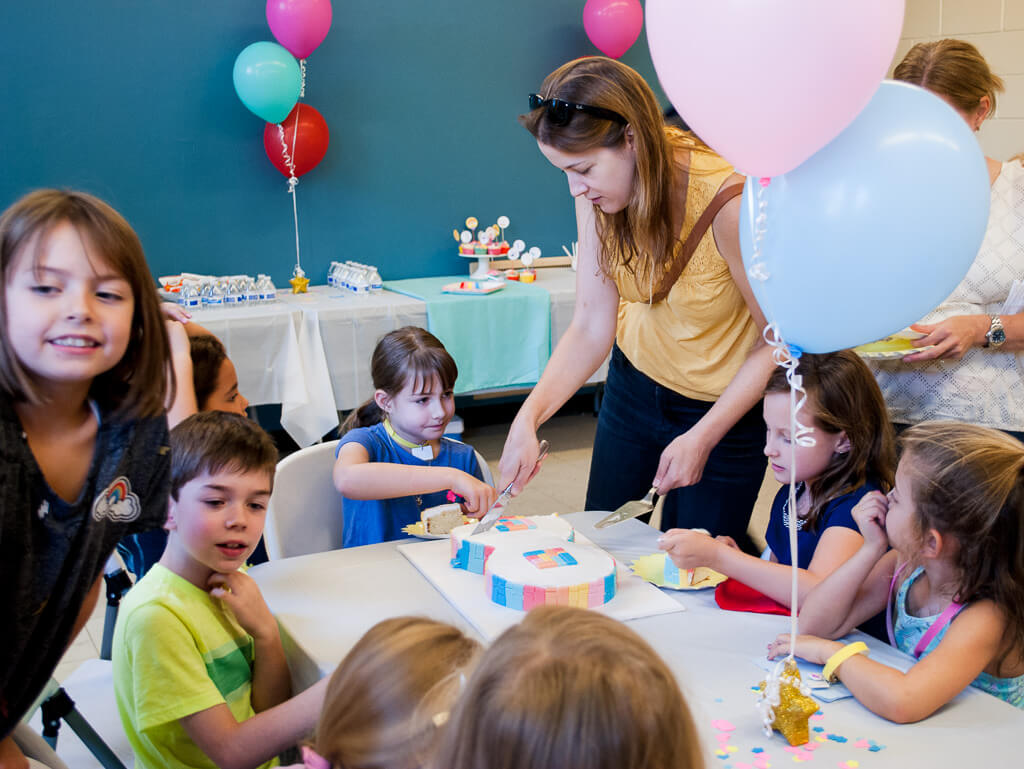 “Me and my girls, we’re best friends forever.” I think that LEGO Friends song is permanently etched in my brain 😀 Make a wish, my special 8-year-old girl! 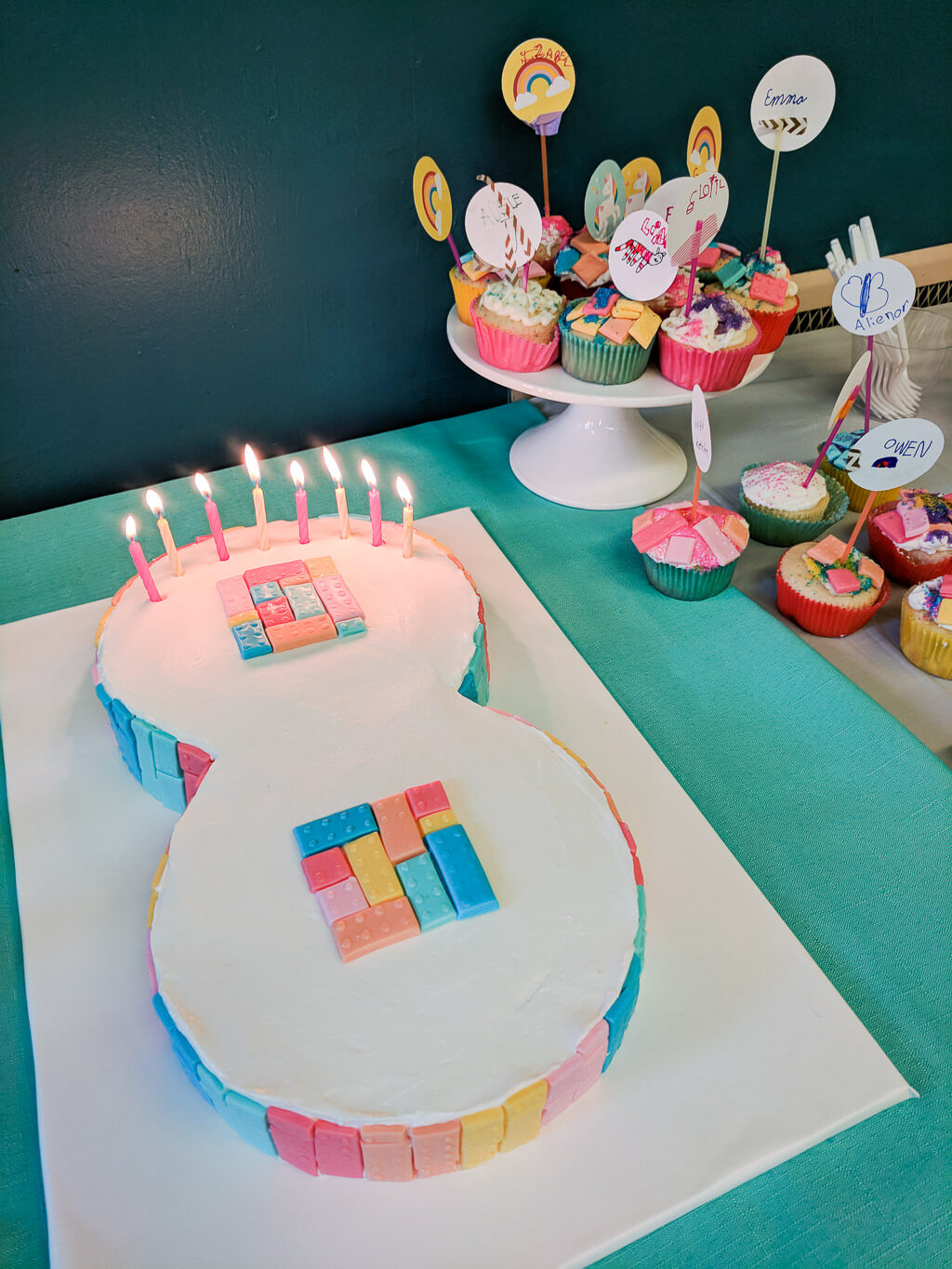 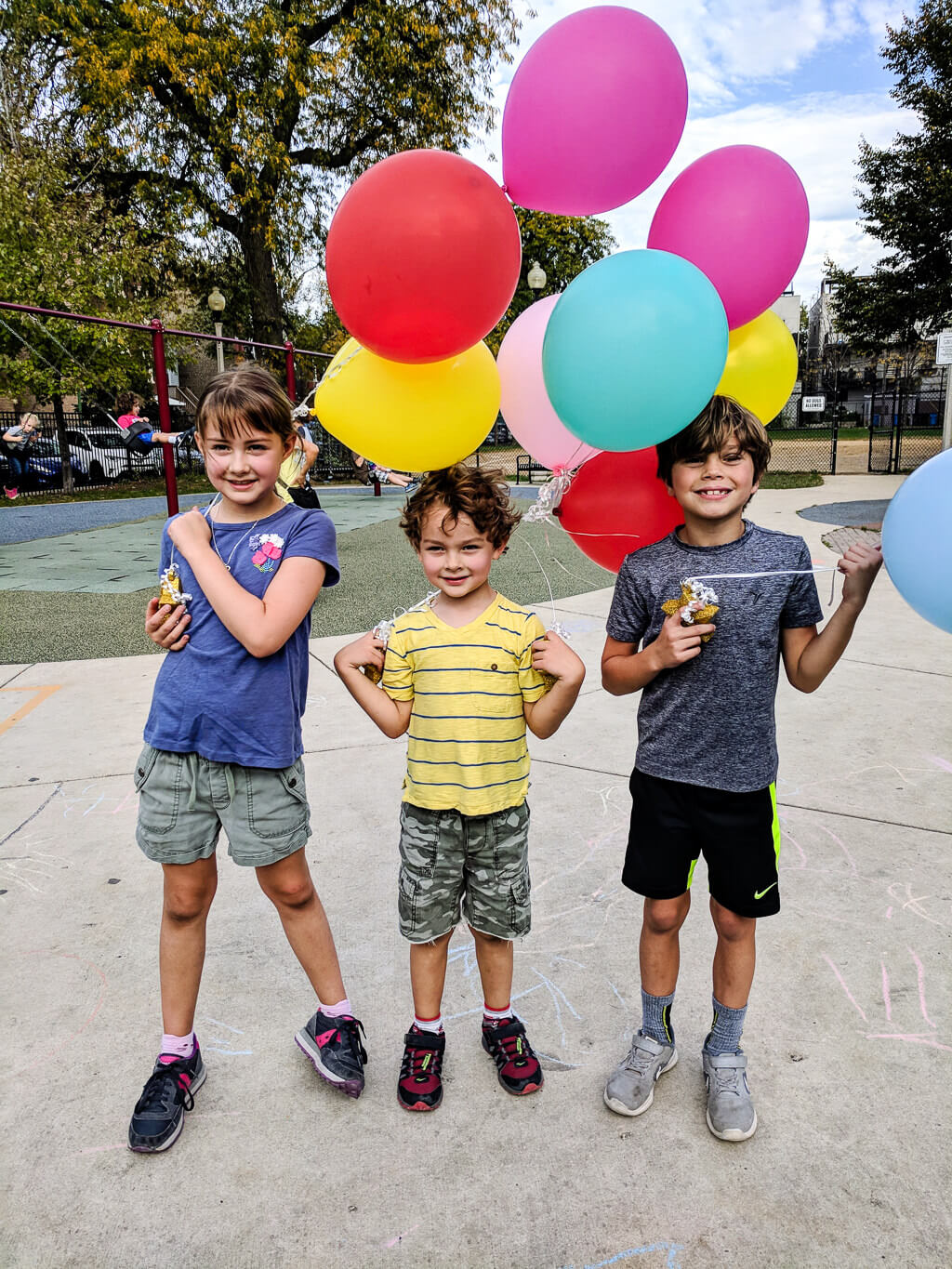 WANNA MAKE IT? Keep reading to see how to make an easy LEGO Friends cake idea for girls –>

To make the birthday cake:

How to make an Easy LEGO Friends cake for girls: 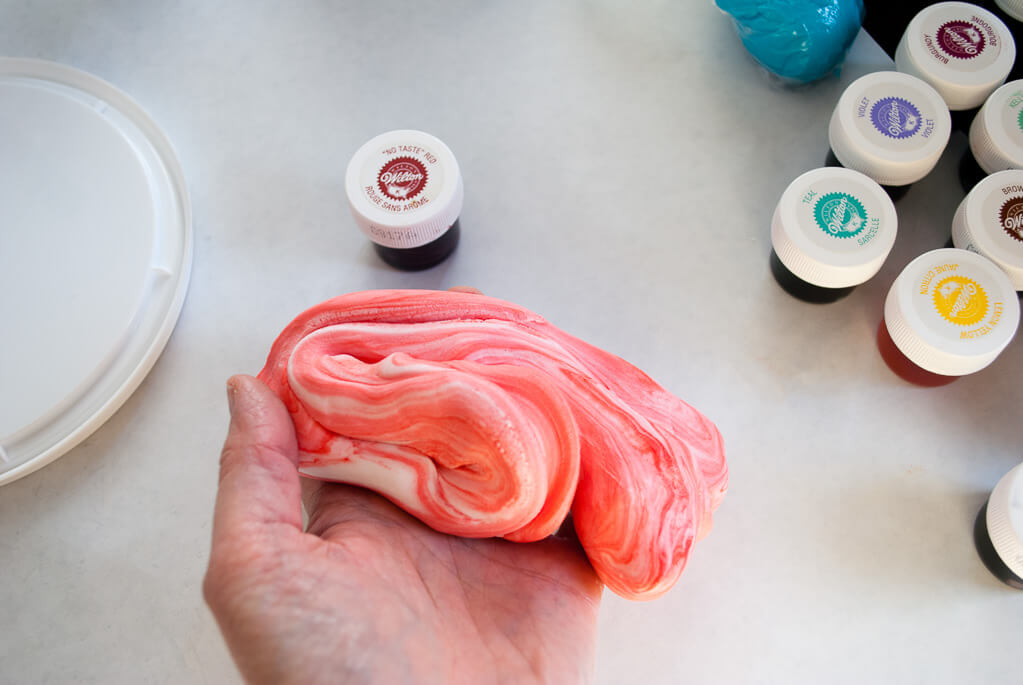 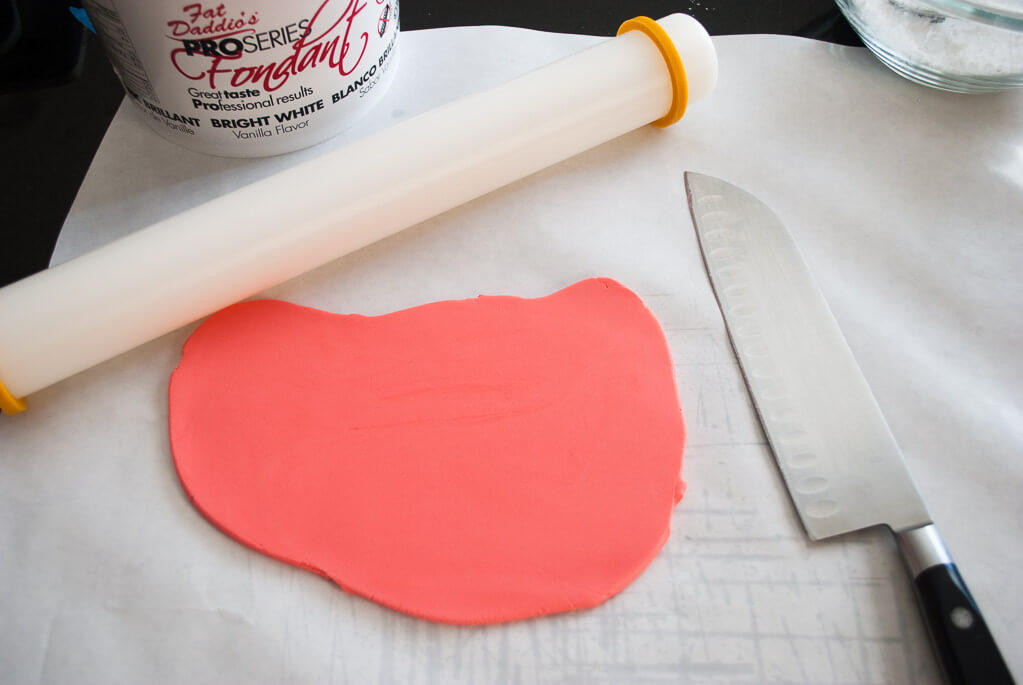 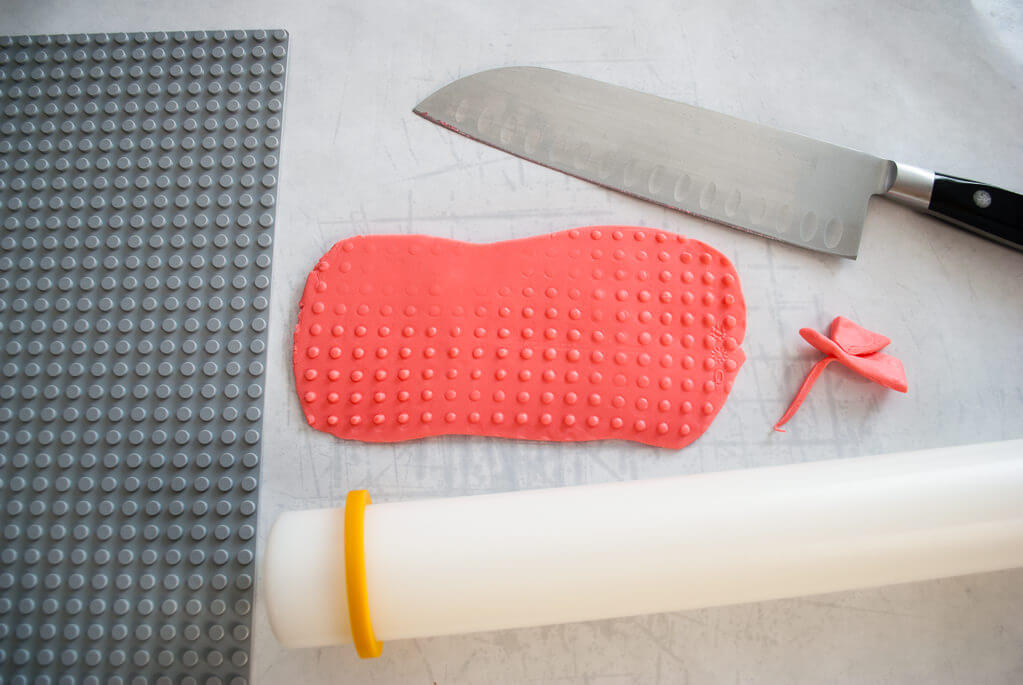 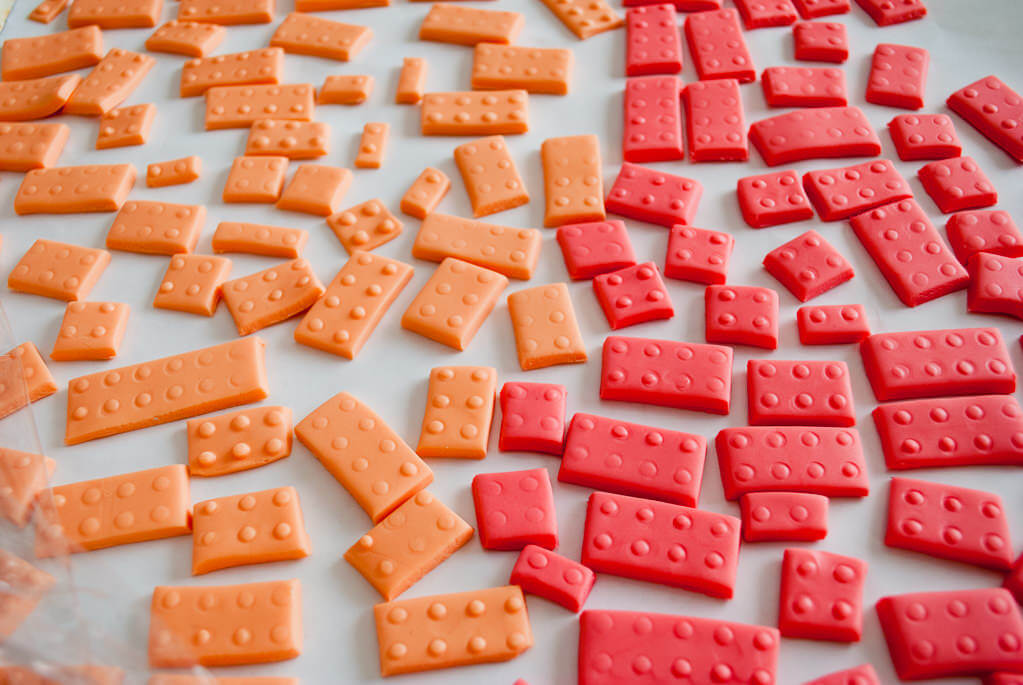 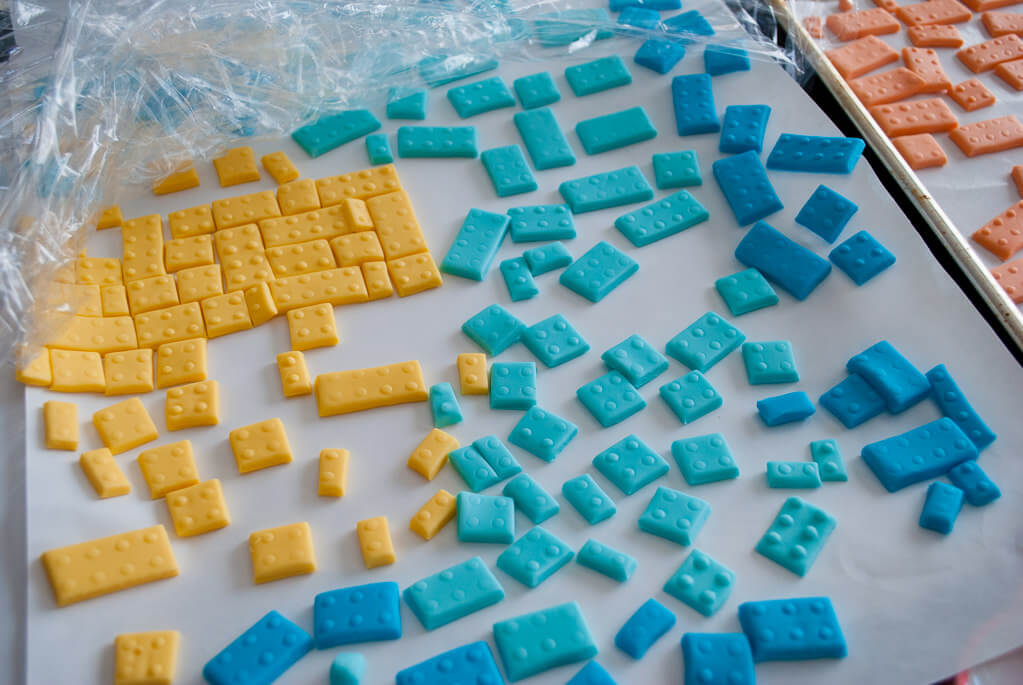 Bake two round vanilla birthday cakes using 9″ round cake pans. As usual, I use the Cakegirls vanilla cake recipe because it’s absolutely delicious. You can bake them in advance up to a month and then wrap them with plastic wrap and freeze them which is what I do every birthday. Cut a little bit off of one of the circle cakes, put a little buttercream icing and then the cakes on the rectangular cake board. Now you have a number 8 birthday cake ready to decorate. 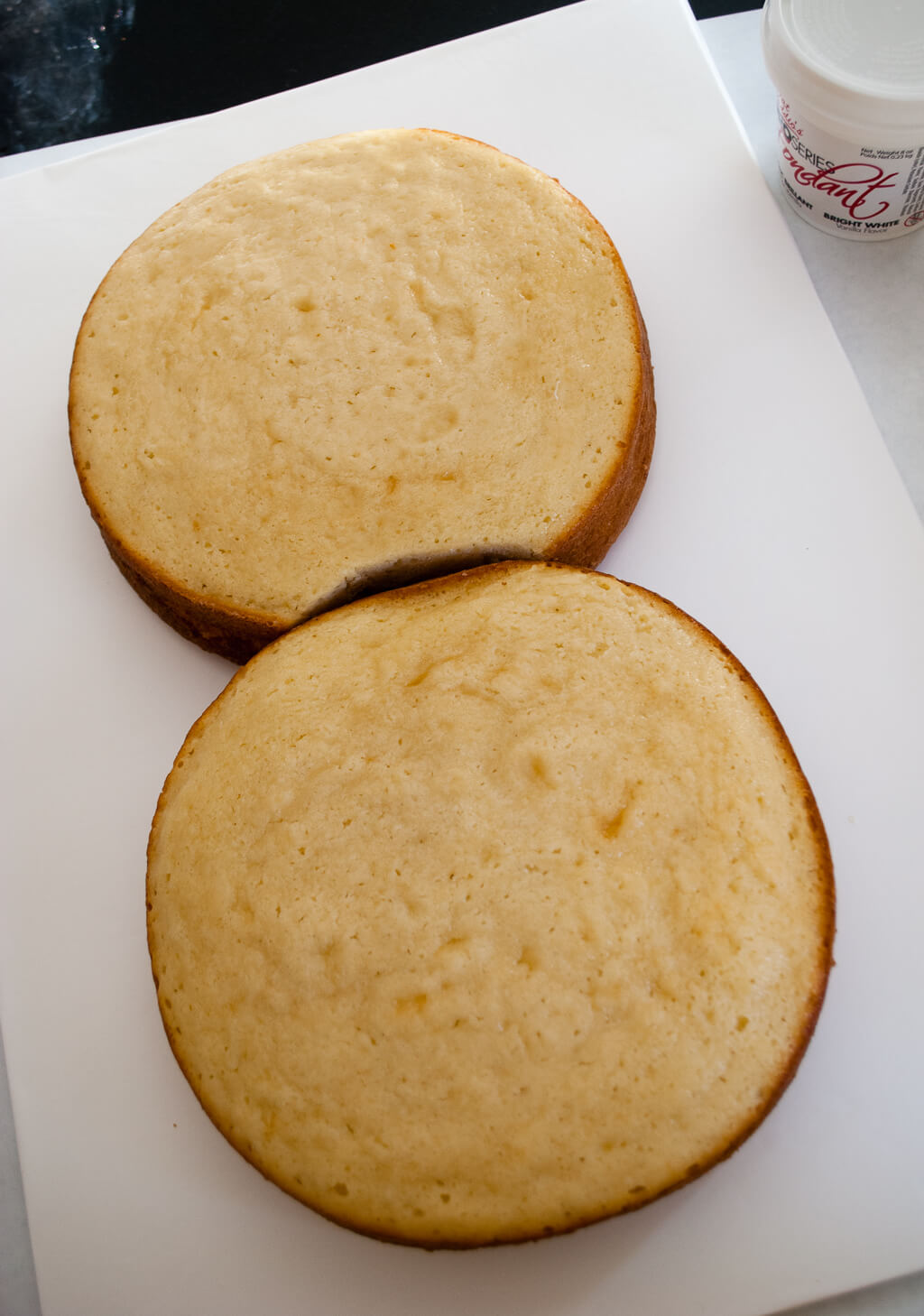 Ice the cakes using the Cakegirls bakery buttercream icing recipe which pairs well with their vanilla cake recipe. Slap on the icing, then use a spatula to smooth it out. 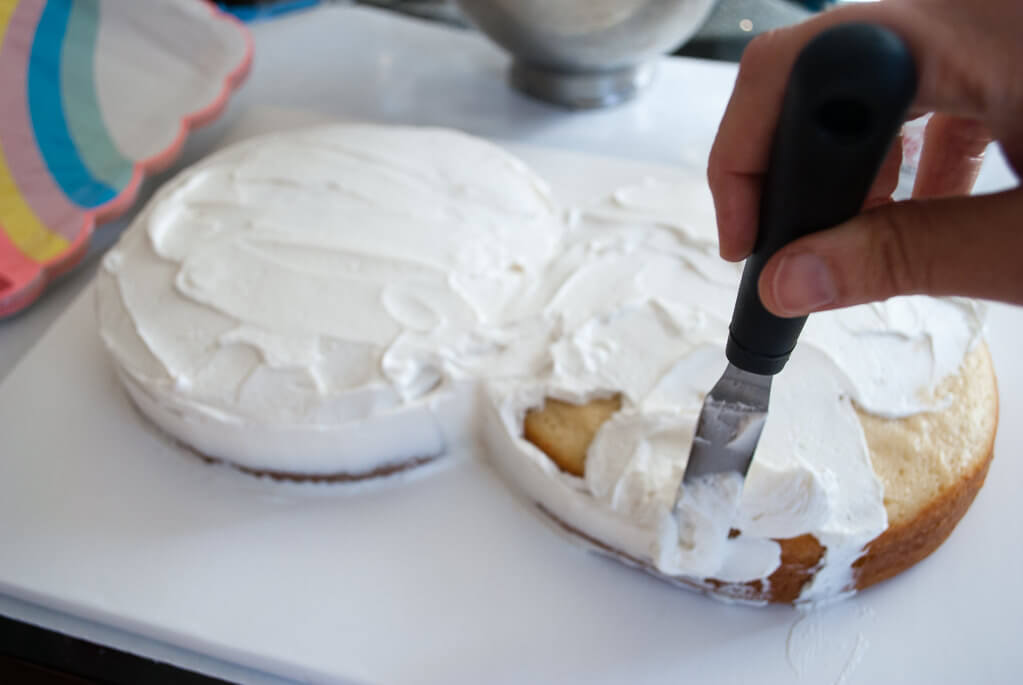 After the icing is all smooth, start placing fondant LEGO bricks around the edges, alternating the sizes to look like a LEGO creation. I created a rainbow pattern that matched our rainbow paper plates and sun-shaped paper plates. 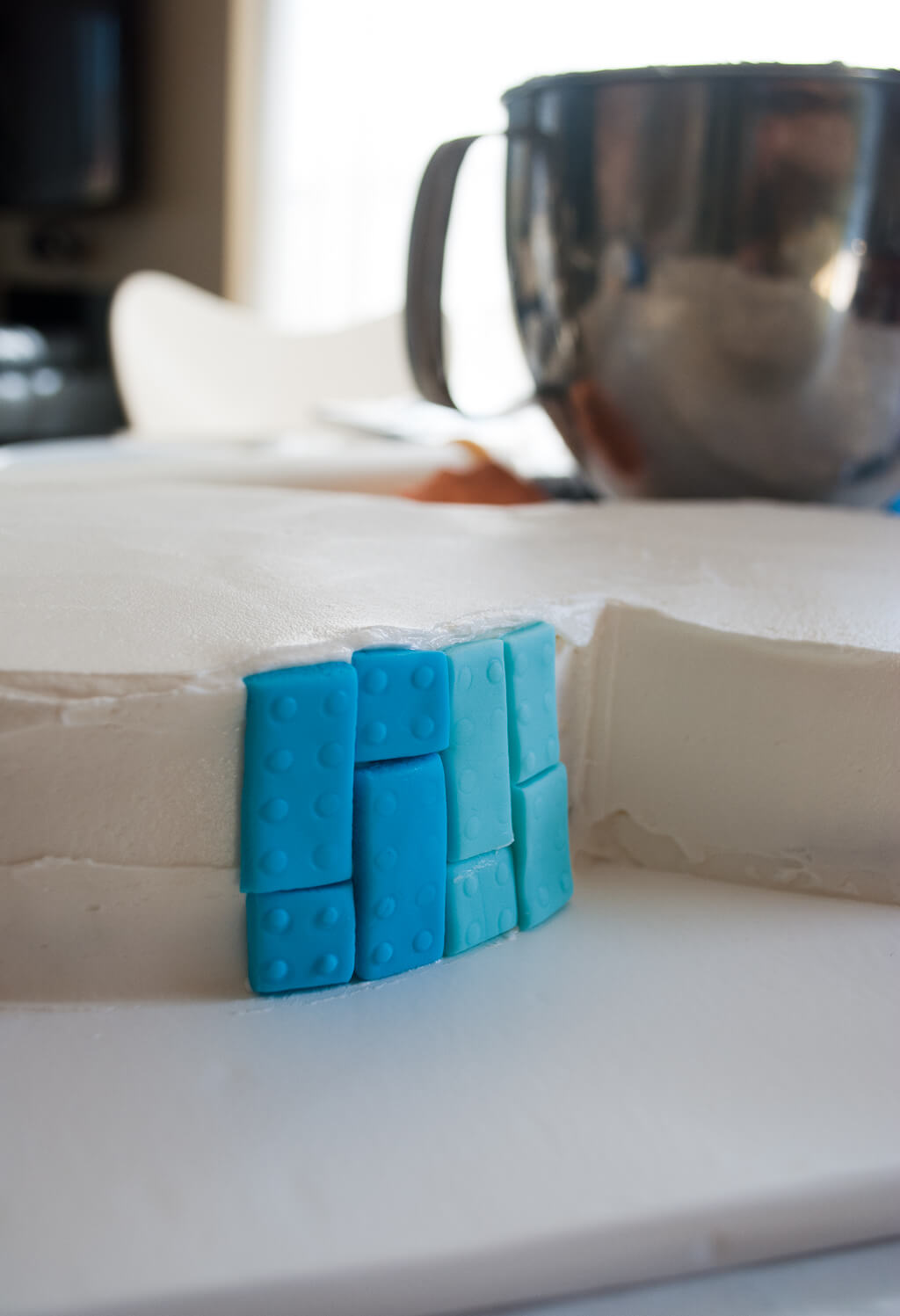 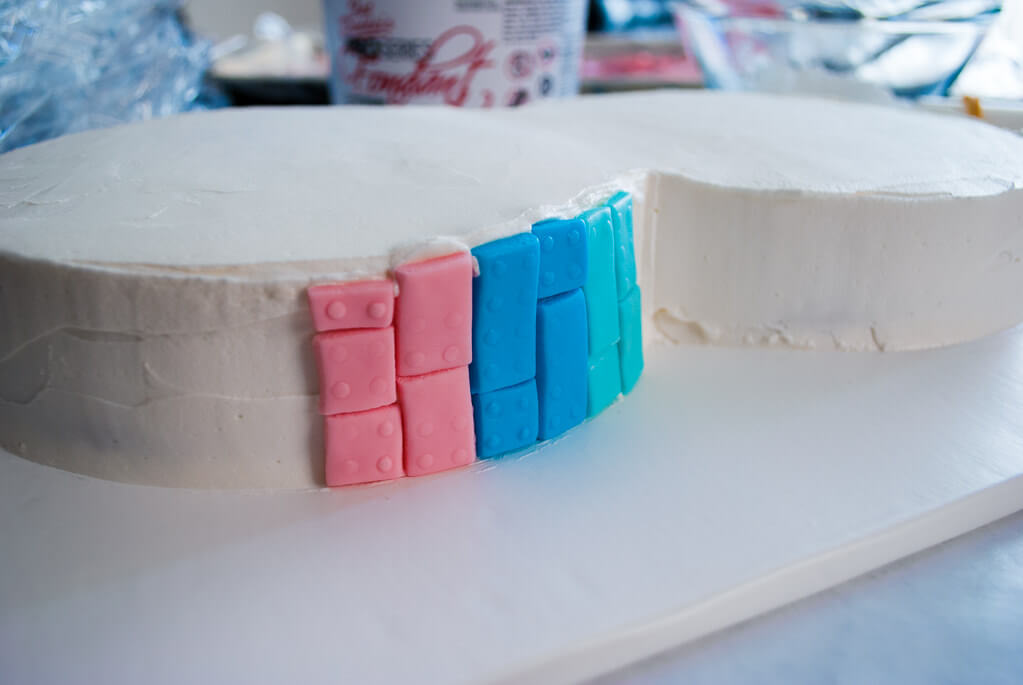 Keep going around until you’ve covered the sides of the LEGO Friends cake. As you can see, I made a lot of extra fondant LEGOs left so we used them at the cupcake decorating activity at the Heartlake Bakery. 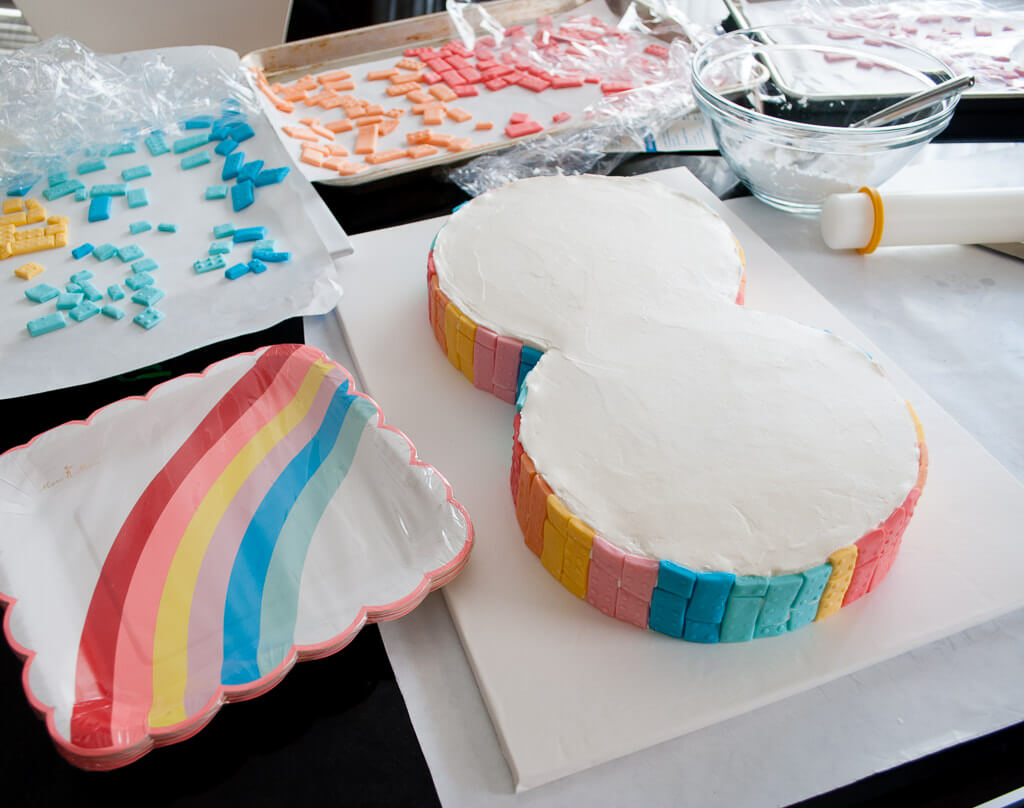 Make the centers of the 8 by creating a square using fondant LEGOs. I thought about then cutting it into circles instead, but I really like the squared-off LEGO look. 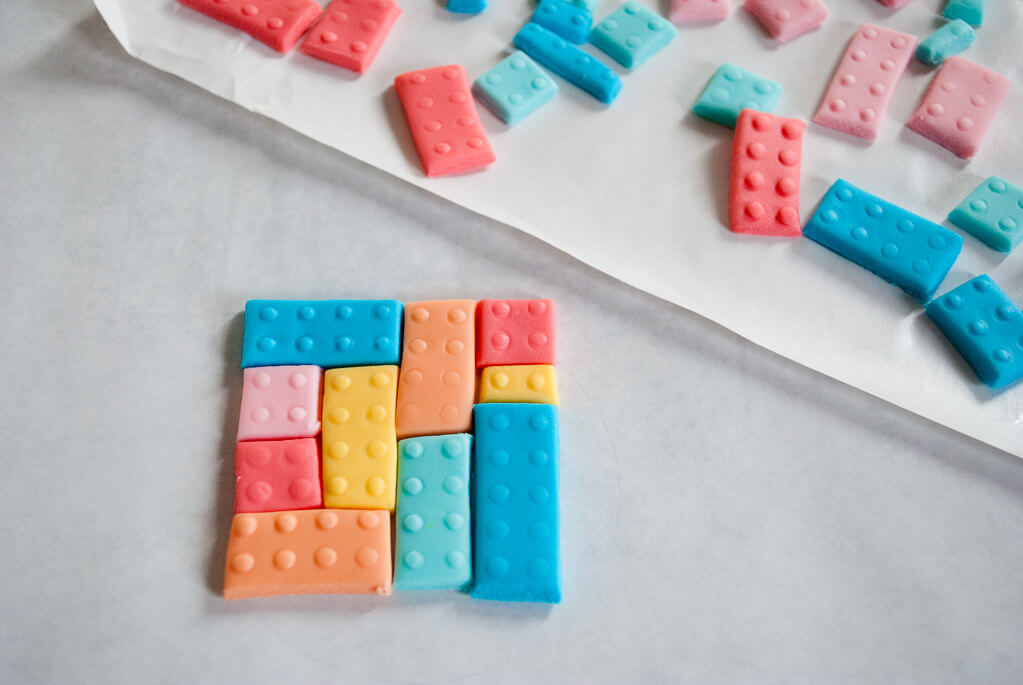 Put the fondant LEGO squares onto the top of the cake to make the age 8. 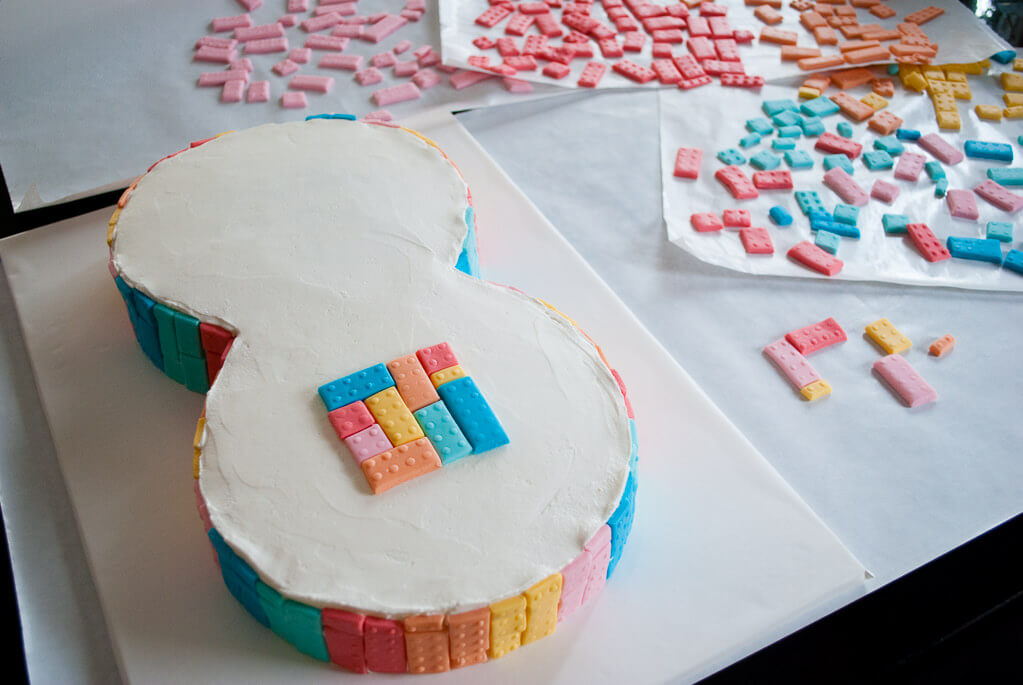 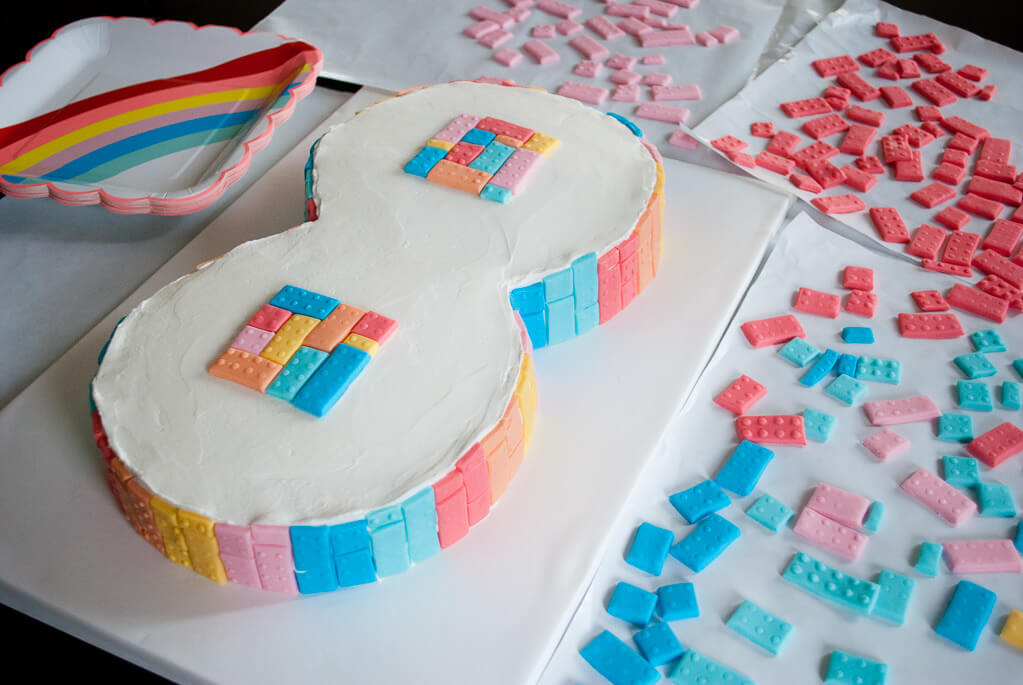 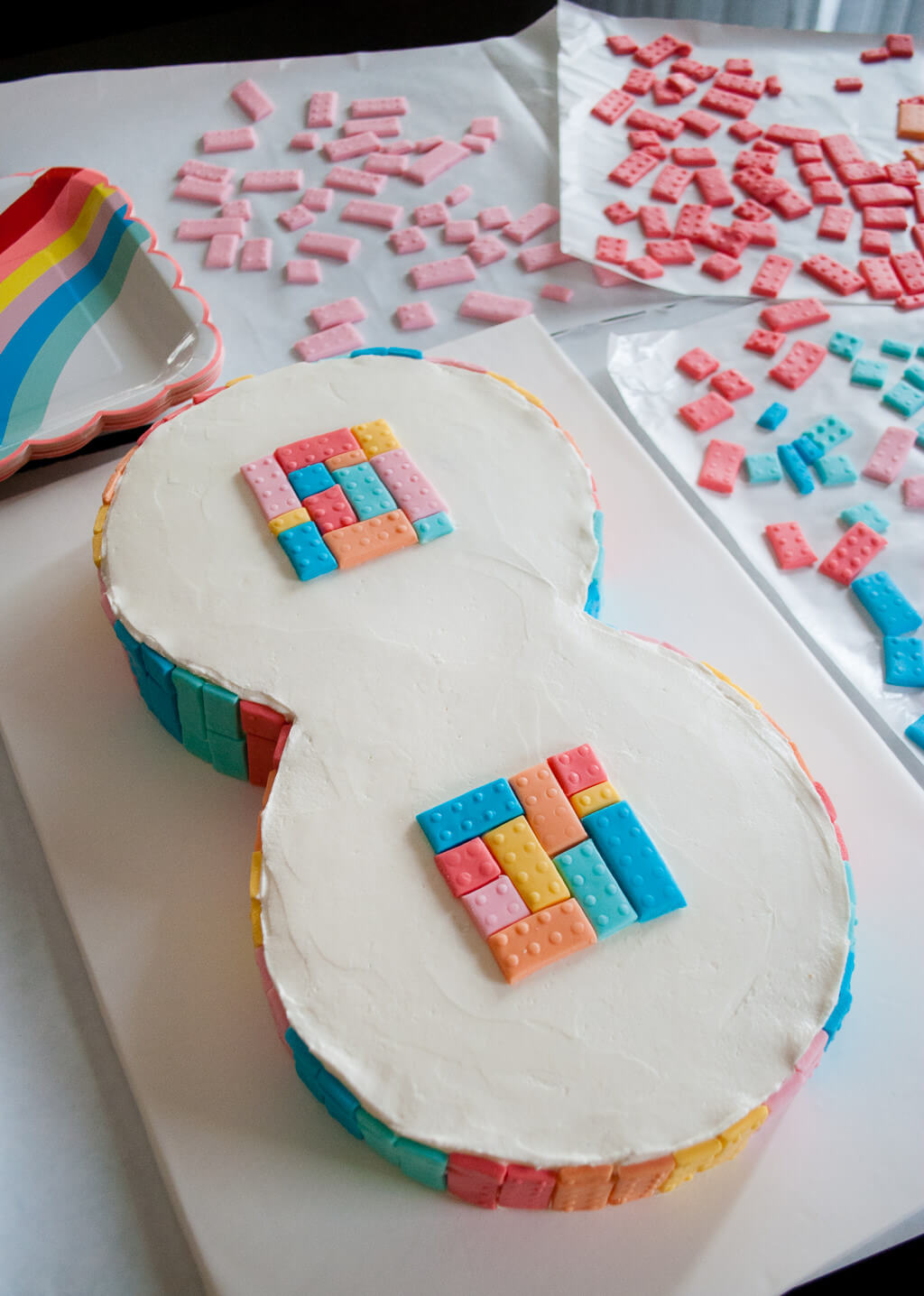 Be sure to pin this LEGO Friends birthday cake idea for girls: 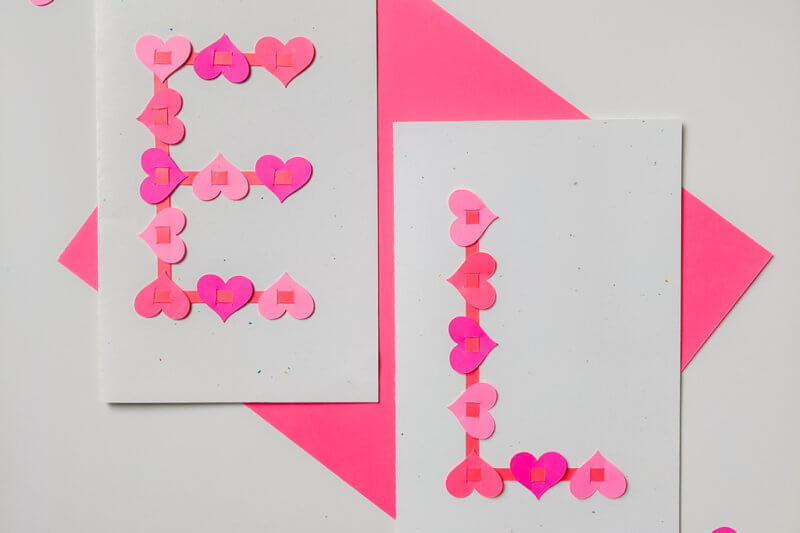 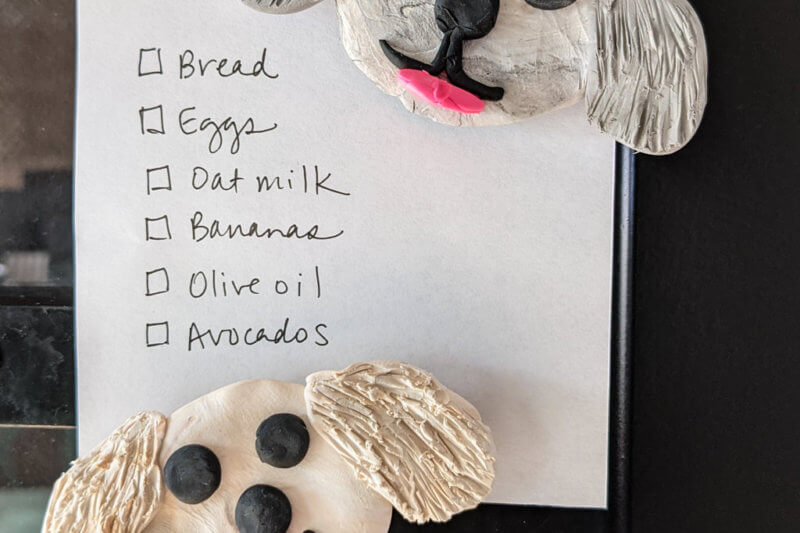