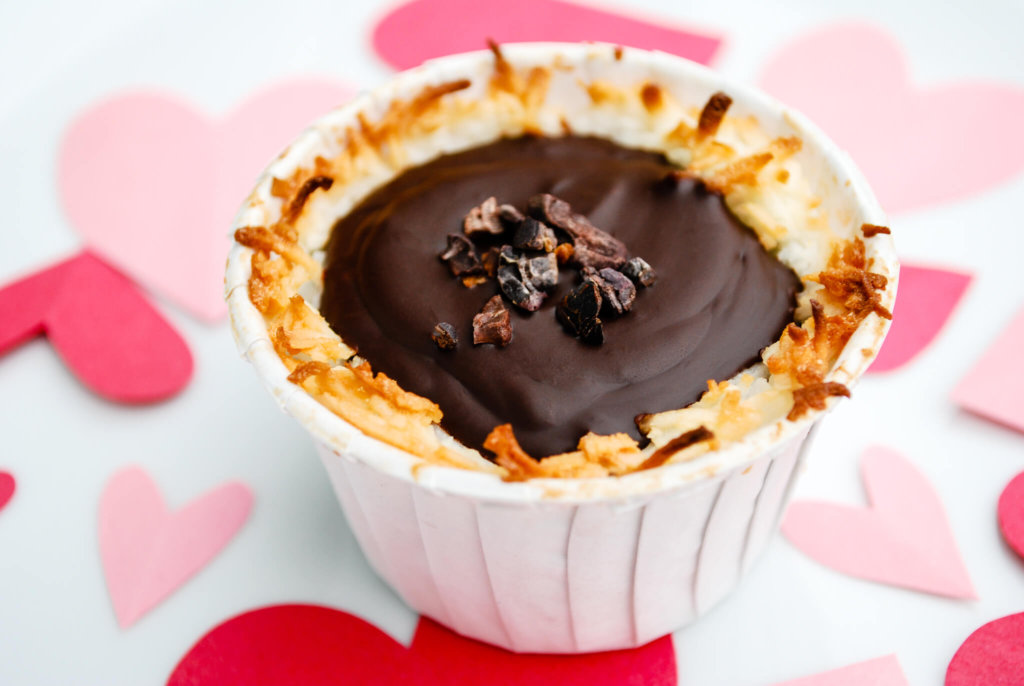 While I’ve never been much of a Valentine’s Day girl, I’ve always been a big fan of coconut and chocolate. I made these special treats by modifying a recipe from an Australian cookbook

Lay out your ingredients. The photo shows enough for eight treats (I doubled the recipe above to make more treats). Preheat the oven to 350 degrees. Chop your chocolate into chunks.

Place the egg whites in a bowl and whip until they’re frothy and start to form peaks. I used a hand mixer but you could also use a stand mixer. Add the coconut and fold in using a spoon.

NOTE: After I made this recipe, I read that egg whites should be whipped at room temperature for the greatest volume, and also ideally whipped in a copper or stainless steel bowl. The article recommends separating egg whites from yolks them while they are still cold because it’s easier, then bring egg whites to room temperature by putting them in a bowl and then setting that bowl in another bowl of warm water.

While the coconut is toasting, make the filling. Place the cream in a saucepan over medium heat and cook until almost boiling, stirring constantly. Remove from heat and add the chopped chocolate, stirring until the chocolate has melted and the filling is smooth.

Ladle the chocolate filling into the coconut cups and sprinkle cacao nibs on the top. Place in the refrigerator for 15 minutes or until the filling is set. I like them best at room temperature so once set consider letting it sit out a bit before enjoying. Serve to your sweetie. 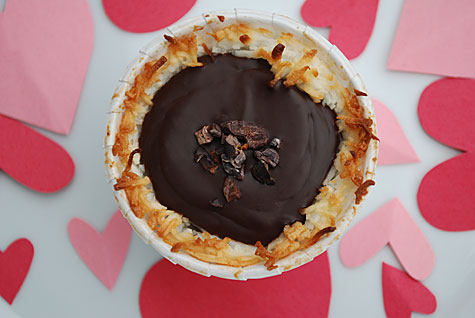 These sound delicious. I'd like to have these at our wedding. How many does a batch make?

Hi Debi, one batch makes four treats using the larger sized nut cups; I doubled it when I made it to make eight. However, you could buy the smaller nut cups and likely get more like 8 per batch. I updated the post with links to the nut cups. This recipe was actually really easy to make overall and tastes super rich and yummy! Would love to hear what you think when you try it out.

this is the most delicious looking thing i have ever seen. you're talent is endless.

Chocolate and coconut is one of the most underrated combinations. I always make people try things like this before they decide they don't like coconut (and I usually convince them). This recipe is a great twist on a classic. Thanks!

I love the recipe for Toasted Coconut Chocolate Valentine Desser. I also strongly recommend using pastuerized shell eggs for safety. I have been regularly using them because I have 3 small kids who love to taste cookie dough. I found a source at safeeggs.com